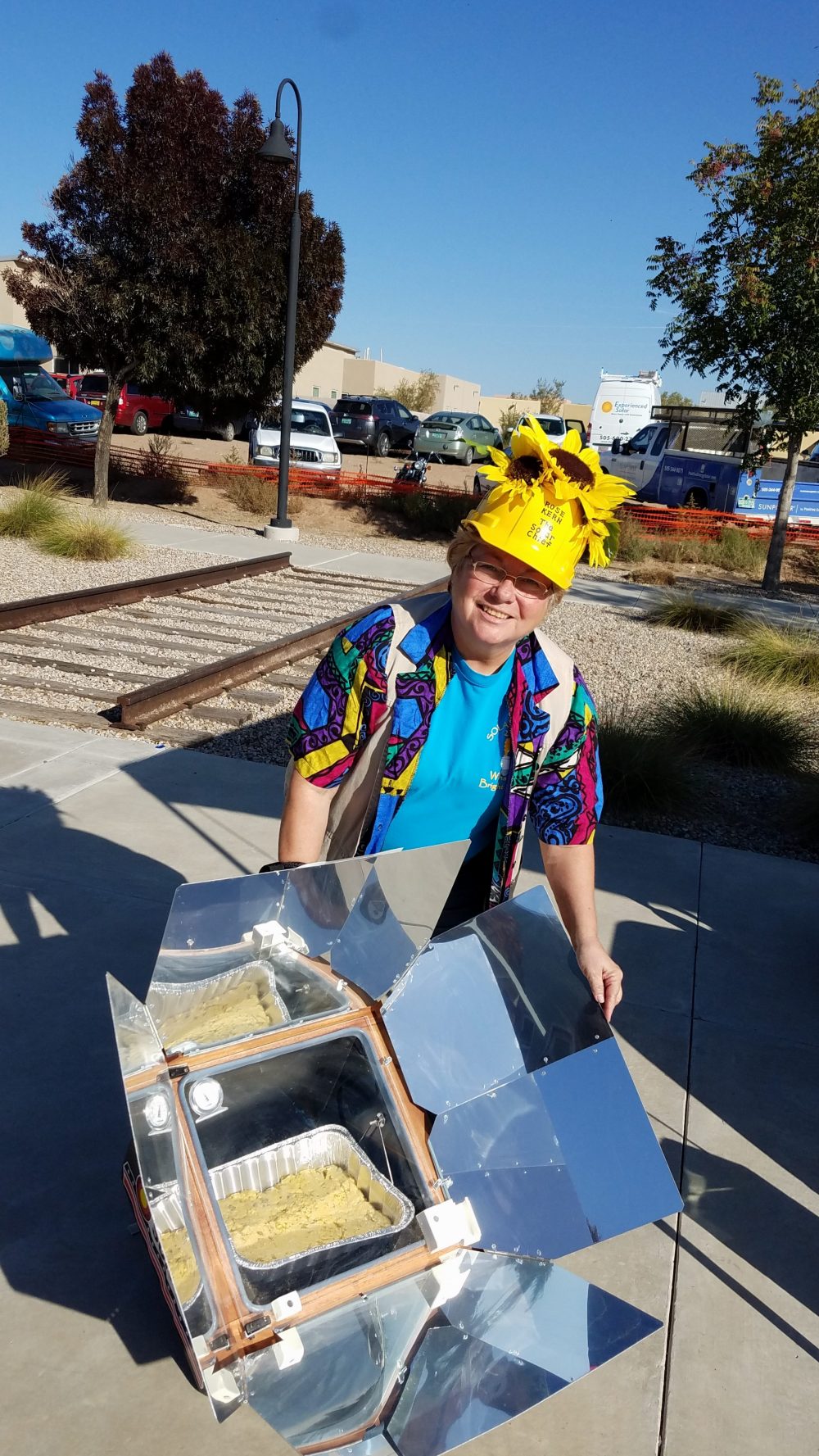 When I was a kid, every summer the TV news folks would choose a very hot day to go downtown, spread aluminum foil on the County Courthouse steps and crack an egg onto it.  They then proceeded to tell jokes about how hot it was.  I don’t ever remember the egg getting cooked–but the image stayed with me. 35 years later I saw my first Solar oven.  It was sitting on the ground and contained a nicely browning turkey.

Solar Cookers have made a splash all over the world in the last 20 years.  In many countries of Africa, there are villages that have little in the way of firewood for cooking,  Sun Cookers, International is a non-profit group that raises money to bring sun ovens made from foil covered cardboard with oven roasting bags to these areas.  A pot of rice and beans placed into this arrangement will cook food for the family without the   women having to spend hours searching for a few small sticks of firewood or dried dung.

There is a town just outside Mexico City wherein the women’s association has built a large solar oven.  Panadaria Solaria is the name of their bakery, which supplies most of the village’s bread. 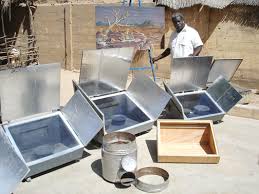 A simple solar oven is made from lining a shoebox with aluminum. Paint the outside of a quart canning jar Black.  You can put hotdogs or water or anything that needs warmed inside the jar. Place the jar inside the box and tilt it towards the sun.  On a sunny day it should only take 15 to 20 minutes for it to be ready.   There are many plans for building oven sized solar cookers from cardboard or wood, and there  are  several kinds of  solar  cookers  that are considered to be  serious appliances.

The All American Sun Oven built by Sunovens International is one such  appliance.  It has petal-like reflectors and  tempered glass doors.  It can reach 425 degrees in summer, and even in winter will cook the evening meal – as long as there is sun!  The beauty of this one is that it folds up quickly, weighs only 21 pounds and is easily transportable.  It can be used during camping when the forest service won’t even allow camp stoves.

It contains a temperature gauge and a suspended platform that keeps food upright even when the box is tilted to   gather maximum sunlight. 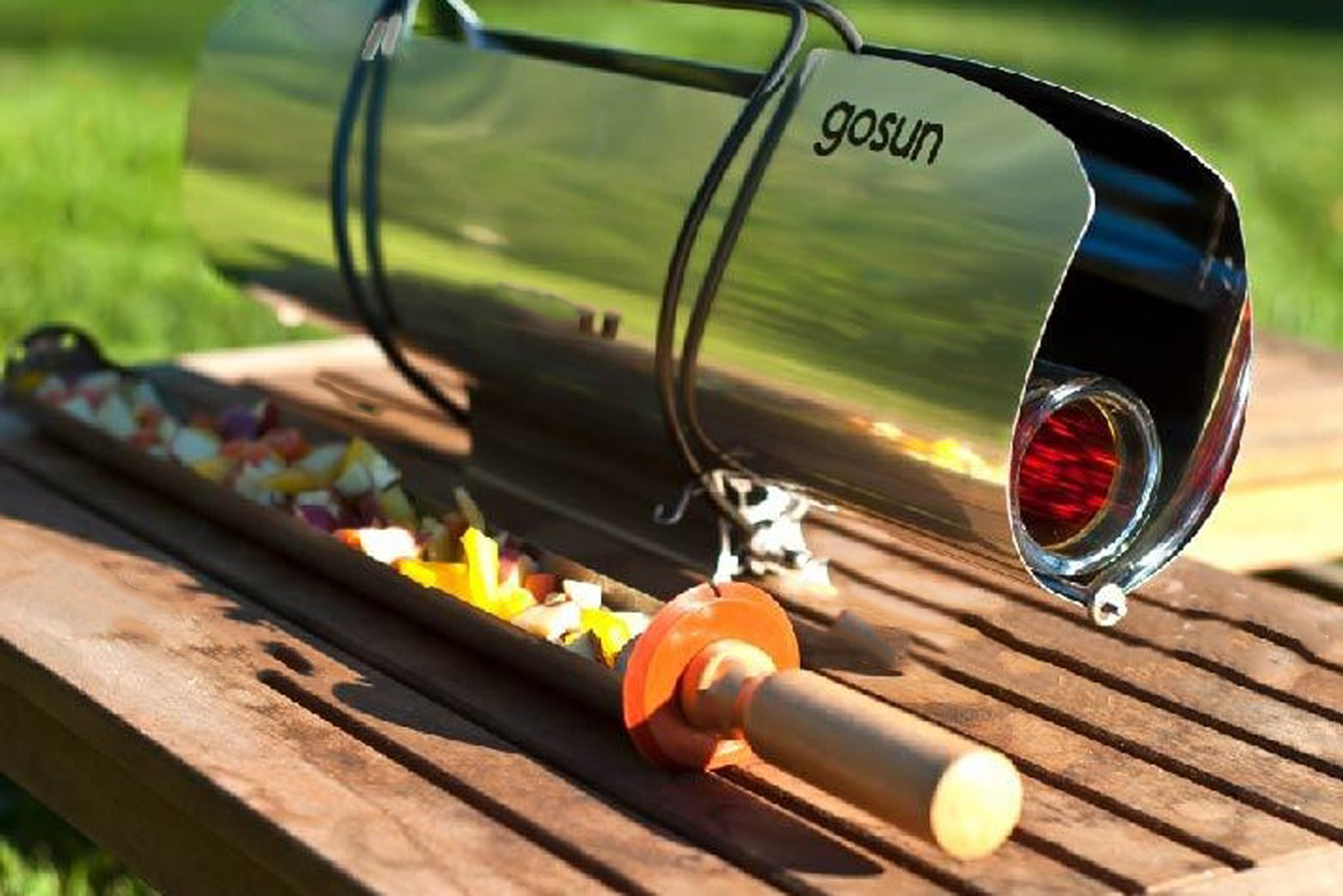 A recent innovation in solar cooking is the solar tube cooker.  A long metal trough in which you place meats or vegetables slides into an evacuated glass tube.  The tube is held in a shiny metal sleeve which catches the sun and focuses it on the tube.  Temperatures can exceed 400 degrees allowing foods to be fried or baked.   The GOSUN company makes these in several sizes.  Some are small and portable, others are larger and made to be set on a table.

There are also several parabolic cookers on the market—or made by innovative individuals from a multitude of materials.  They boast curved surfaces which reflect light toward a pot suspended at the point where the light is focused.  These can achieve higher temperature, and are very good for frying.  These are not as easily portable as the box cookers, but can quickly boil your morning coffee!

Other alternative solar cookers can be quickly put together in an emergency, though some make practical alternatives for daily use as well.  If you have bright sunlight you can place food in a dark crockery pot with a lid, set it inside an oven bag, then surround it outside with a shiny car window shade aimed at the sun.    An easy way of heating up lunch on a sunny day is to set any container on the dashboard of your car.  Make sure the car is pointed south with the sun hitting the windshield and the windows rolled up.

Although most of us in the United States  don’t have the problems faced by the women in Africa, there are several advantages in using Solar Cookers.  It reduces the amount of gas or electricity we use with regular stoves – lowering the utility bill.  It reduces the amount of heat we generate when using conventional stoves indoors – so our air conditioning does not have to blow out the heat – again reducing the utility bills.

Another difference is the source of heat.  A standard oven’s heat is generated at the bottom of the oven.  The Solar Oven fully surrounds the food, which is why you do not end up with food that is burned on the bottom.   The disadvantages of a solar oven is that it takes more time and is weather dependent.  But this means that the slow cooking enhances the flavors.  There is also the fact that it’s just plain fun and the food tastes wonderful.

You can  treat it like a crockpot.  Take something frozen and put it in a clear casserole dish.  Set the dish into the solar oven before leaving for work in the morning and point it towards where the sun will be at around 1 pm.  During the morning hours the slant angle of the sun thaws the food.  As the sun climbs towards noon it begins to cook, then when the sun slides to the west the temperature lowers to where it isn’t cooking anymore but it is keeping warm.  When you come home from work a couple of hours later the casserole is thawed, cooked and tasty!

Another aspect of using a solar box cooker is its versatility.  It can be used to sterilize water in an emergency.  It can also be used to dehydrate vegetables or process jerky—though that requires lower temperatures.  There is more specific information on that option later in this book. 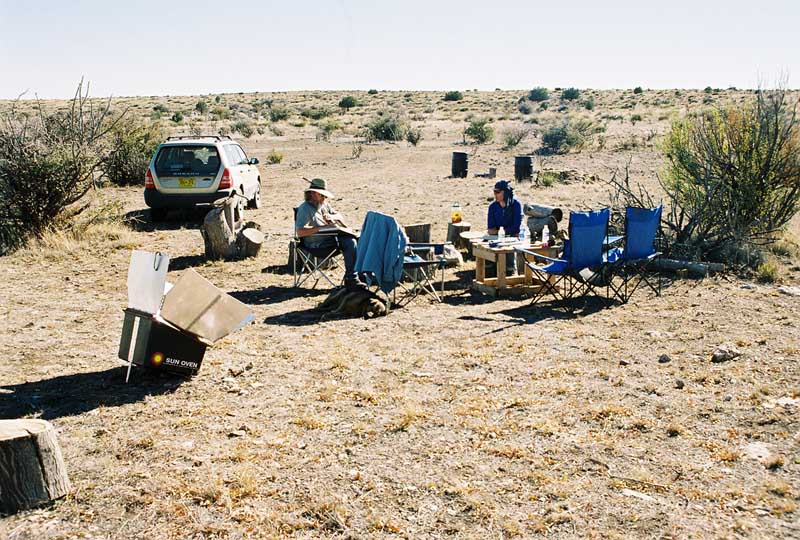 Sun ovens can go anywhere.  One hot august day I was camping in the mountains of northwestern New Mexico.  The danger of fire was high and no one was allowed to start fires or even use a propane stove.  Around noon I set my sun oven up with a pot full of rice, beans and veggies.  As the aroma drifted through the campground I saw a forest ranger wandering around to ensure the rules were being obeyed.  He followed his nose to my campsite.  He saw the solar oven and with a grin, just shook his head.  Of course, I invited him to stay for dinner.

I wrote The Solar Chef cookbook originally in 2003 because I could not find anything on the market that discussed the flexibility of a sun oven, nor the wide variety of foods you can make.  The book is not all encompassing—its purpose to defy the limitations that some people assume are part and parcel when you cook food without using electricity, gas or flame.

Whether you bake chocolate chip cookies, meatloaf, cakes, roasts, snacks, pizza, or just about anything else, the flavor of anything solar cooked is enhanced.  It is as though the touch of the sun adds an extra blessing  to your meals!

For information on purchasing an All-American Sun Oven go to www.sunoven.com